Script by:Mark Thomas McGee (Screenplay), Craig J. Nevius (Screenplay), Fred Olen Ray (Story)
Directed by:Jeremy Stanford
Year:1993
IMDb:tt0108223
Plot:Todd Dougherty has an imagination driven by comic books. So when he accuses his soon-to-be stepmother of being a monster, no one believes him. When neighbors start turning up dead, it becomes a race against time for Todd to stop this hideous, carnivorous creature from marrying his dad and ruining his life.
Follow one of the following links for Stepmonster Scripts: 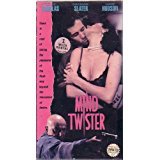