Script by:Larry Gross (Screenplay), Jim Thompson (Story)
Directed by:Michael Oblowitz
Year:1977
IMDb:tt0117898
Plot:Marty Lakewood is a reporter forced to leave Chicago and his family because he had uncovered too much police corruption. He returns to his small home town on the California coast to his ailing mother and prostitute sister, with whom he had an incestuous affair. Being short of money, he seduces a woman cop in order to sell her house.
Follow one of the following links for This World, Then the Fireworks Scripts: 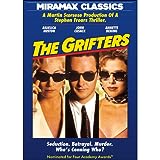 Script by:Jim Thompson (Novel), Donald E. Westlake (Screenplay)
Directed by:Stephen Frears
Year:1990
IMDb:tt0099703
Plot:A young short-con grifter suffers both injury and the displeasure of reuniting with his criminal mother, all the while dating an unpredictable young lady.
Follow one of the following links for The Grifters Scripts:

Script by:John Curran (Screenplay), Jim Thompson (Novel), Michael Winterbottom (Writer)
Directed by:Michael Winterbottom
Year:2010
IMDb:tt0954947
Plot:Deputy Sheriff Lou Ford is a pillar of the community in his small west Texas town, patient and apparently thoughtful. Some people think he is a little slow and maybe boring, but that is the worst they say about him. But then nobody knows about what Lou calls his "sickness": He is a brilliant, but disturbed sociopathic sadist.
Follow one of the following links for The Killer Inside Me Scripts: