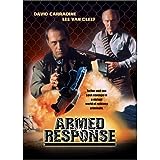 Script by:T.L. Lankford (Screenplay)
Directed by:Fred Olen Ray
Year:1986
IMDb:tt0090659
Plot:One of Tanaka's underlings has stolen a rare statuette that he had planned to use as a peace offering between the local Yakusa and Chinese Tong. He hires two private investigators to exchange ransom money to recover the statuette, but the trade goes down bad and Clay Roth is killed. This angers Roth's brothers and father, all combat veterans, and they go after the people responsible
Follow one of the following links for Armed Response Scripts: