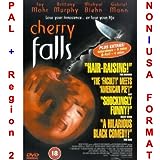 Script by:Ken Selden (Screenplay)
Directed by:Geoffrey Wright
Year:2000
IMDb:tt0175526
Plot:Cherry Falls is a quiet little town - until the night that a serial killer begins preying on its youth. After a third teen is found slain, the killer's modus operandi emerges: the victims were all virgins. Sheriff Marken is concerned for the safety of the teens in general and in particular his own daughter Jody, who is still a virgin...
Follow one of the following links for Cherry Falls Scripts: