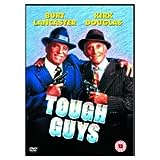 Script by:Jim Cruickshank (Screenplay), James Orr (Screenplay)
Directed by:Jeff Kanew
Year:1986
IMDb:tt0092105
Plot:Harry Doyle (Lancaster) and Archie Lang (Douglas) are two old-time train robbers, who held up a train in 1956 and have been incarcerated for thirty years. After serving their time, they are released from jail and have to adjust to a new life of freedom. Harry and Archie realize that they still have the pizzazz when, picking up their prison checks at a bank, they foil a robbery attempt. Archie, who spent his prison time pumping himself up, easily picks up a 20-year-old aerobics instructor. Harry, on the other hand, has to waste away his days in a nursing home. They both have festering resentments -- Archie for having to endure a humiliating job as a busboy; Harry for having to endure patronizing attitudes toward senior citizens. The two old pals finally go back to what they know best. After successfully robbing an armored car, they decide to rob the same train that they robbed thirty years ago.
Follow one of the following links for Tough Guys Scripts: