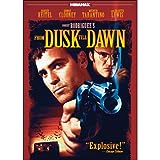 Script by:Quentin Tarantino (Screenplay)
Directed by:Robert Rodriguez
Year:1996
IMDb:tt0116367
Plot:Seth Gecko and his younger brother Richard are on the run after a bloody bank robbery in Texas. They escape across the border into Mexico and will be home-free the next morning, when they pay off the local kingpin. They just have to survive 'from dusk till dawn' at the rendezvous point, which turns out to be a Hell of a strip joint.
Follow one of the following links for From Dusk Till Dawn Scripts: