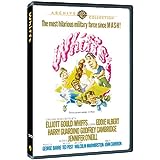 Script by:Malcolm Marmorstein (Writer)
Directed by:Ted Post
Year:1975
IMDb:tt0073891
Plot:Elliott Gould steals Army nerve gas to help him rob banks when he’s kicked out of the military after 15 years of service as a human guinea pig in its chemical warfare experiments.
Follow one of the following links for Whiffs Scripts:

Script by:Michael Werner (Author), Robert H. Rimmer (Author), Ted Cassidy (Author)
Directed by:Ted Post
Year:1973
IMDb:tt0070157
Plot:At fictional Harrad College students learn about sexuality and experiment with each other. Based on the 1962 book of the same name by Robert Rimmer, this movie deals with the concept of free love during the height of the sexual revolution which took place in the United States.
Follow one of the following links for Harrad Experiment Scripts:

Script by:Leonard Freeman (Screenplay), Mel Goldberg (Screenplay)
Directed by:Ted Post
Year:1968
IMDb:tt0061747
Plot:Marshall Jed Cooper survives a hanging, vowing revenge on the lynch mob that left him dangling. To carry out his oath for vengeance, he returns to his former job as a lawman. Before long, he's caught up with the nine men on his hit list and starts dispensing his own brand of Wild West justice.
Follow one of the following links for Hang 'Em High Scripts:

Script by:Pierre Boileau (Novel), Paul Dehn (Screenplay), Mort Abrahams (Screenplay)
Directed by:Ted Post
Year:1970
IMDb:tt0065462
Plot:During a rescue mission to locate missing astronaut George Taylor, John Brent crash lands on the Planet of the Apes. Brent, along with Taylor's companion, Nova, find he has disappeared into an underground city known as the Forbidden Zone and attempt to track him down.
Follow one of the following links for Beneath the Planet of the Apes Scripts: